This is a continuation of the discussion begun in Newton Rezoning and Newton's Current Land Use and Taxation about the proposed rezoning of Newton's private golf courses from Residential Districts into Recreation Districts. This chapter on the golf courses is being placed near the end of the Table of Contents, because not everyone is interested in golf courses.

Newton's currently has 543 acres (0.85 sq. mi.) of private golf courses. This acreage is a relatively large number, representing half of all taxable nonresidential land in Newton. The private golf courses are currently all zoned in Single Residence Districts which would allow housing to be built on the golf course land. The proposed new ordinance Article 5: Public Use and Recreational Districts would rezone the private golf courses into standalone Recreational Districts, however, where almost no housing is allowed, other than one accessory caretaker's cottage per lot. This would reduce the land available for housing and it "might" also reduce Newton's property tax revenue from the golf courses, where the qualified "might" is explained below. In the case of a golf course sale, this change in zoning would give potential financial benefits, in the hundred million dollar range, to some potential golf course buyers.

Since all three courses are in Single Residence Districts, this means that if a private golf course was sold today, then it could be developed into housing - and its fair market value would reflect that development capability. If the golf course was rezoned into a new Recreational District before the sale, however, then housing could only be built according to the Recreational District's specifications, which, again, in the proposed new zoning ordinance, allows no residential housing other than one accessory caretaker's cottage per lot. This means the proposed rezoning of the private golf courses into Recreational District would reduce the land available for housing and should also reduce the market value assessments of the private golf courses, because they would no longer be eligible for housing development, unless they were rezoned back to Residential Districts at a later date.

Importantly, there are two types of "fair market values." If a golf course was to be sold, the non-profit seller would have to submit an appraisal to the Massachusetts Attorney General justifying that the sale price was fair market value. In addition, the Newton tax assessor's office has to supply an annual fair market value assessment in order to calculate the property taxes owed by the golf courses. Theoretically, these two fair market values should be the same value, but that is not always the case if the property type, such as a college campus or a golf course, is not part of an active market where frequent local sale transaction prices can be used as a empirical reference in estimating market value. Without these sale transaction prices, there is a lot of room for subjective differences of opinion on fair market value.  This happened in the case of the Mt. Ida campus sale, for example, in which the appraised market value (and sale price), was only half of the tax assessor's value.

As can be seen in Table 1, the private golf courses currently bring in the smallest property tax revenue/square mile of any taxable land use in Newton. This is because of two things. First - Newton's private golf course land is currently claimed as 61B recreational land which allows a temporary 75% property valuation reduction under M.G.L. 61B(Classification and Taxation of Recreational Land), while the land remains in recreational use. Secondly, even before the 75% reduction is applied, the golf course valuation itself is difficult, because, again, there is no active market of local golf course sales, meaning that the golf course can be undervalued.

Note that it is only the land, not the buildings, that get the temporary 75% valuation reduction - and not all Massachusetts private golf courses claim 61B status, although all three private golf courses in Newton claim this status. In addition, if the golf courses are sold to anyone other than "for a natural resource purpose by the city or town in which it is situated, by the commonwealth or by a nonprofit conservation organization," then Newton would be PAID interest and 5 years of roll-back taxes on the full 100% taxable valuation (rather than 25%). This would be an approximate lump sum property tax payment of 17 times the PAST 5 year average of the annual golf course property tax payment (5+0.75 interest)*(0.75/0.25). M.G.L. 61B, §8  (Disqualification of land; roll-back taxes).

It is difficult to estimate the market value of golf courses because, again, there are so few local golf course sales, making it an inactive market. Furthermore, most 61B golf courses are zoned in residential districts, meaning they are available for housing development, but the precise value of that development potential is also difficult to estimate. It would grossly over-estimate the value to simply value the golf course land using 100% of the measured single-family land values or even the measured developable residential land values, because it is unknown how many housing lots could be obtained from the golf course or how much it would cost to make them developable. Rezoning land from a Residential District to a Recreational District where no housing is allowed should decrease the market value of the land, however, because there are fewer uses allowed on the land.

Of the 16 courses found, only two courses, Stow and Framingham, were zoned in Recreation Districts. The other 14 courses were all zoned almost totally in Residential Districts, with some small Commercial District portions. And of the two courses that were zoned in Recreation Districts, the assessed average single-family land values of those towns were extremely low, roughly 10% of Newton's expensive single-family land values of $2.5M/acre, as shown in Table 2.

Thus, it seems strange for Newton's Planning Department to even suggest rezoning such a large area of Newton's high value land into a Recreational District, where only a caretaker's cottage can be built on each lot. This strangeness is especially noticeable, given the Planning Department's rebranded mission of increasing the supply and diversity of Newton's residential housing supply with the rezoning.

Figure 1, shows the empirical measurement of the ratio of per acre golf course assessed value to single-family assessed value for the 14 golf courses in residential districts. From this figure, it appears that Newton is on the low side on its Tax Assessed valuations of 61B Golf Courses, compared to the other municipalities, although Newton's value is still in the normal range.

While Newton's current assessed golf course values of 2% of Single-Family Land values fall within the acceptable range, Figure 1 presents solid evidence that the values could be higher - at least up in the 3% range assessed by Concord and Andover. Figure 1 also presents even stronger evidence that the assessed values for Newton should not be lower, as Newton is already in the low range of municipal assessments of 61B golf courses, given Newton's high per capita income.

If Newton's private golf course owners are planning to use their more restrictive Recreation District rezoning to request a lower tax assessment value, then this should be refused because Newton's golf courses are already being taxed at a fairly low rate compared to other municipalities - and there does not appear to be a single other instance in Massachusetts where 61B golf course land is located within high value residential land and zoned in a Recreational District. 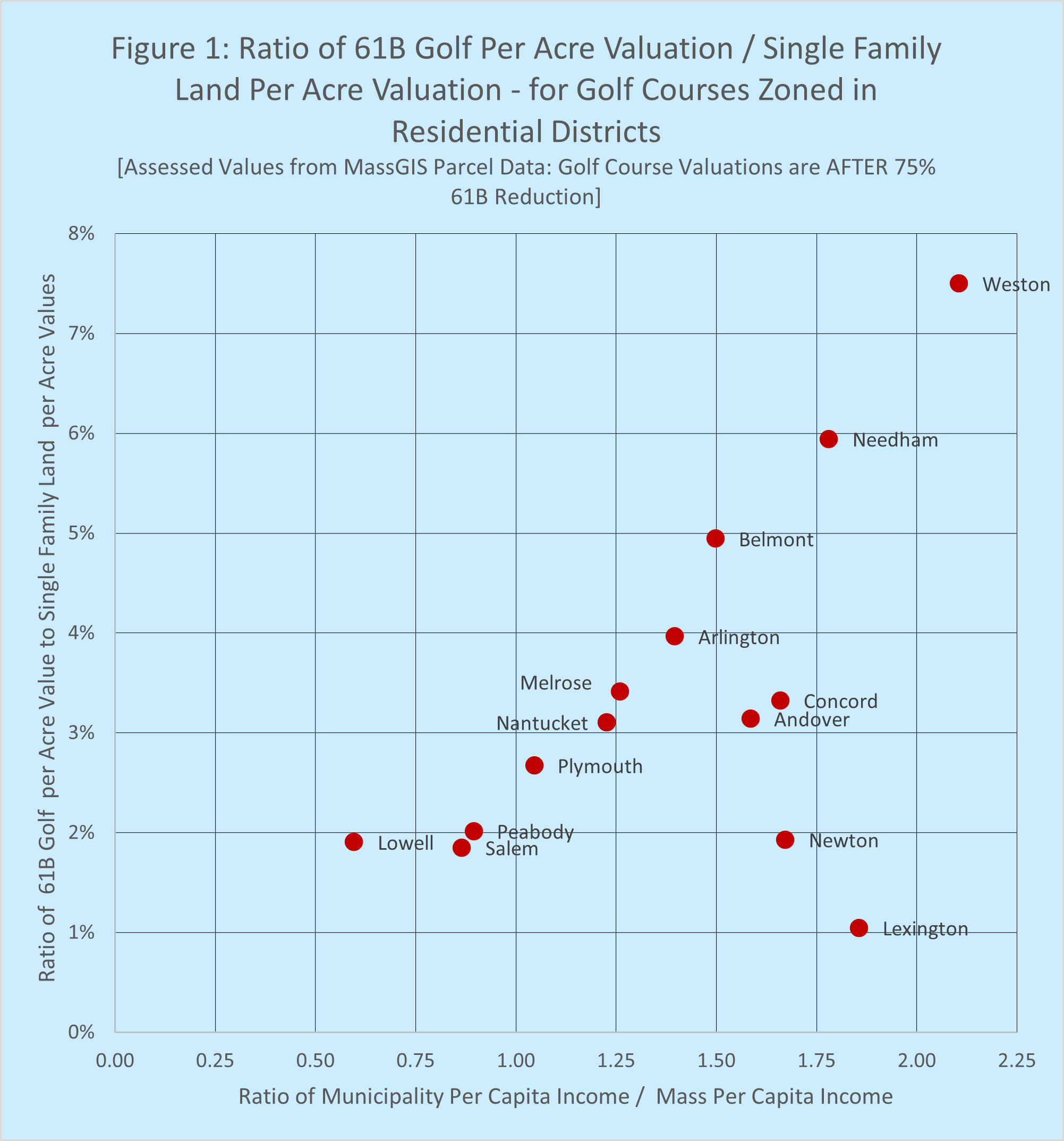 If Newton's private golf course owners are planning to use their more restrictive Recreational District rezoning to justify a lower golf course sale price to the Massachusetts Attorney General, this will become known at a later date in the pre-sale appraisal submitted to the Massachusetts Attorney General - as this appraisal will be a public record. This would allow the public to get an approximate understanding of how much the Recreational District rezoning benefit was worth to the private parties involved. This private benefit could then be compared to the public cost of the rezoning effort, a public cost born by the Newton taxpayers. NewtonRezoning.org is currently working on estimating this public cost.

The 61B golf courses (with areas >10 acres) in Table 2 and Figure 1 were identified with the help of the Massachusetts Department of Revenue's "Parcel Count and Valuations by Use" report.  It is possible that some 61B golf courses were missed with this approach, however, and NewtonRezoning.org may add to the data sample in the future, as well as possibly include some non-61B golf courses. In addition, there was an adjustment made to the Nantucket single-family land value measurement. All of the golf courses and the majority portion (by area) of single-family homes in Nantucket are zoned in "Limited Use Districts," that requires significant open space. NewtonRezoning.org only included the 1,300 single-family homes in the Limited Use Districts in the Nantucket single family land value measurement, and not the entire island.